While I’ve been a little MIA the past few weeks, it’s all for a good reason.  On October 26th, my husband, our son (and new big brother) Jimmy and I welcomed a new little member to our family, Martin “Marty” John Reaney at Prentice Women’s Hospital at Northwestern Medicine. Marty was so excited to meet his new family that he came into this world super fast arriving at 7:07am weighing in a 7 lb, 14 oz and 21 inches long. 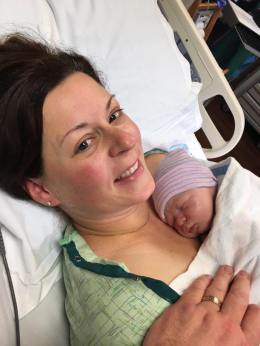 As many of you are aware, I take daily blood thinners to prevent any blood clots and because of this I was induced for Marty’s arrival.  We arrived at Prentice at 1:30AM and, after checking-in and getting settled in the L&D room, my IV and Pitocin was started about 3:30AM.  After the contractions became unbearable, I asked the nurse to have the anesthesiologist issue my epidural at about 5:30AM.  About an hour into the epidural I started to think that it wasn’t working because I was having some major pains, but unbeknownst to me it was because Marty was trying to arrive on his own.  My doctor barely arrived in time to deliver the baby!  I labored from start to finish about 3 hours and barely pushed three times before he shot out of me!  Because his arrival was so quick he developed a grunting, which sounded like a soft wheezing sound, due to the amniotic fluid still in his lungs.  While we thought this sweet sound was cute for about the first hour, when it lasted more than 10 hours post-birth, the pediatric team said it was actually caused from fluid in his lungs which usually would have passed within an hour or two post-birth. 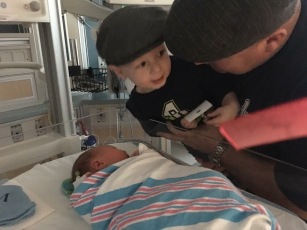 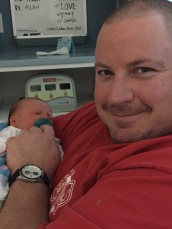 Since Marty was still making this grunting sound, the pediatric team admitted him to the NICU for observation until he was discharged from the hospital 48 hours later. While his oxygen and blood levels were completely normal, the NICU started him on two antibiotics via an IV to prevent any infection he might be fighting off, which was another possible cause of the grunting sound.  After his lab work came back all clear, he was finally released from Ann & Robert H. Lurie Children’s Hospital of Chicago.

We had a few more bumps in the road medically during Marty’s first weeks (i.e. tongue tie which sent us on an ENT visit to Lurie, an abnormal newborn screen blood test which required four days of isolation at home until the test results came back normal–which they did–and the return of the grunting sound which is the result of his esophagus muscles still developing which is also normal). All of these little bumps in the road had me praying a lot to God and all my angels to make sure our little “Miracle Marty” was safe and healthy, and I have also returned to regular mass attendance (which is a post for another day). 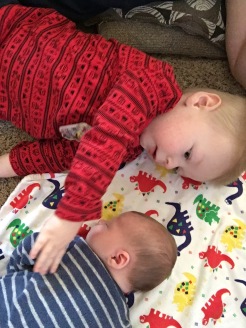 While each year I am so blessed and thankful for my family and friends, who are the best support system I could have ever imagined, this year I am truly thankful for the medical caregivers in my life.  I am so thankful my OB/GYN, my hematologist and our pediatric offices are all connected on the Northwestern system and talk to each other on a pretty regular basis.  I never have to explain my medical history because everyone seems to already know my “case” and is informed on all my medical issues.  Over the past month I have received many calls and follow-up calls directly from my doctors checking in on how I’m doing and how Marty is doing.  It has been overwhelming, and delightfully comforting, to be known as a patient in a large medical practice, not just a number.  Thank you so much to all the caregivers in my life, but especially the unnamed staff and faculty of Northwestern Lurie and Prentice hospitals who continue to give the best care to my little family.  You have made this family so very blessed! 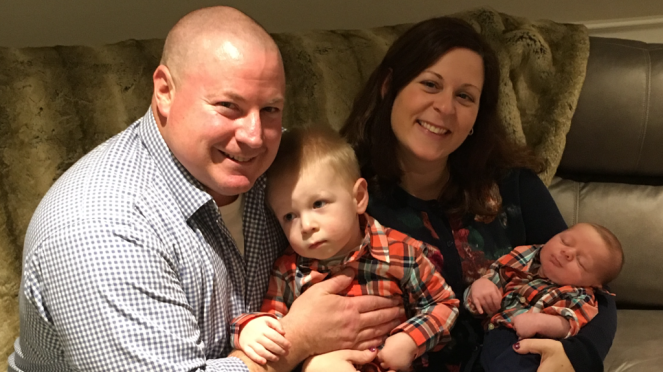