Starting every February 15, many homes in our neighborhood transform to cottages of glowing shamrocks, leprechauns, dishtowels/potholders and multiple shades of green decor to celebrate what my family would call “St. Patrick’s Month.”  While St. Patrick’s Day is celebrated on March 17th, many weekends in the month leading up to it are filled with several family traditions of parties, concerts, parades and celebrations to embrace our Irish heritage.

Many years back I started my own tradition of reading an Irish-themed book during the month of March to learn more about my Irish heritage and to discover new Irish authors (or sometimes they are just new to me).  This year, after reading a book review on the Irish Central website, I knew my 2016 selection was going to be Rolling Up the Rug: An American Irish Story, Vol. I by Michael Scanlon.

When I ordered my copy from Amazon.com, I noticed that it was being sold directly from the author, which isn’t that unusual, but something of note.  Then, when the package arrived, it was addressed to me, hand-written, with Mr. Scanlon’s return address.  After reading the first 25 pages I was moved to contact Mr. Scanlon to see if he would be okay with me writing a book review for my humble little blog here in Chicago and, graciously, he sent me back this very lovely note:

Dear Colleen,
Thank you for your kind words. Here is a recent photo and a short biography as you requested.

I should tell you that you have a great blog. I am forwarding it to my daughter who lives in Portland, Oregon and to my daughter-in-law in Los Angeles. The blog is beautifully presented and very clearly written. Congratulations!

All the best to you and thanks again.
Michael 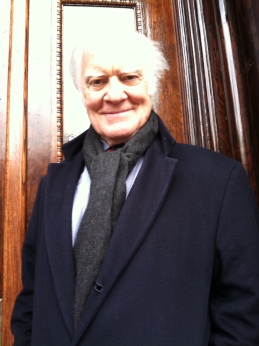 Michael Scanlon, 76, the son of Irish immigrants from County Sligo and County Leitrim, was raised in the Bronx and now lives in Park Slope, Brooklyn. He is married with two children and four grandchildren. He served as an officer in the United States Navy during the Cuban Missile Crisis and went on to teach English at the City University of New York. The first volume of his memoir Rolling Up the Rug: An American Irish Story (Amazon) was published this past year. He writes for IrishCentral.com where he continues to explore what it was like growing up in New York City in the 1940’s and 50’s.

While there is some truth that no Irishman knows how to tell a short story, Mr Scanlon has accomplished this feat in his 100-page autobiography about growing up in an Irish home in the Bronx.  The title alone, Rolling Up the Rug, grabbed my interest right away as I’ve heard tales in the past from family members on how this tradition of clearing the home’s floor for Irish dancers and musicians was the norm during gatherings.

Each chapter in his book describes a different memory of Mr. Scanlon’s life and the lessons he learned. From his first communion at Sacred Heart, to gathering after Sunday mass at “Croke Park” in the Bronx – which also had a restaurant/bar and was later renamed Gaelic Park – to watch the Gaelic games (crazy, right?  I read this passage as if he was talking about the southside of Chicago), his memories are uniquely Irish-American yet universally identifiable. Rolling Up the Rug gives some insight into Mr. Scanlon’s family and, especially, the hardworking man his father was, working two jobs to support his family in their apartment in the Bronx. There is also a funny tale about his father getting in trouble at the airport for carrying on his small, homemade cigarettes – too funny!

While reading Mr. Scanlon’s autobiography, I was transformed to many kitchen tables in my family (including our own) where family stories are shared over a few shots of VO, pints of Magners or cups of tea.  In an Irish home, the kitchen table is where all of life’s problems are solved and where you can find solace at the end of a long day.  Even on my first trip to Ireland this past summer, while in Williamstown, County Galway, my husband and I were invited into a home of a family friend (whom we just met) where were sat around the Burke’s kitchen table for a cup of tea and some delicious homemade brown bread to talk about our travels in Ireland and how our family was doing back home in Chicago.

As a child I would hear the same tales over and over again, but I never found the appreciation for why these stories existed or what lessons were learned until years later. Many of my older relatives, including my grandparents, passed away before I was able to appreciate where they came from, the lessons they learned from their parents, or even to remember the stories they told. Even now, I have very few solid memories of stories told by my elders. Luckily I have family members like my cousin, Mary Eileen, who can share these stories over a shot of honey whiskey.  🙂

I would highly recommend Mr. Scanlon’s book to anyone with strong family and/or childhood ties, but especially to those with Irish-American roots.  This book tugs on the heartstrings and captures the boyhood of a child of Irish immigrant parents striving to make roots in America as his parents intended.

3 thoughts on “Book Review: Rolling Up The Rug – an American Irish story by Michael Scanlon.”